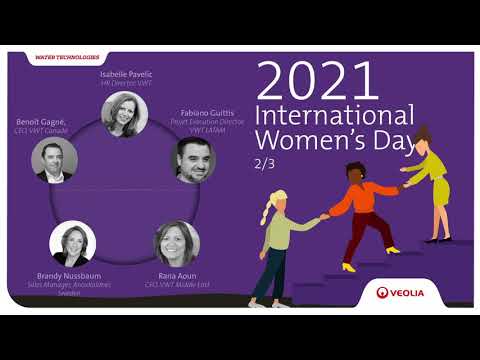 Hello, this is Isabelle Pavelic, Human Resources Director of Veolia Water Technologies. Last time, you heard Rana, CFO of VWT Middle East, Brandy, Sales Manager at AnoxKaldnes, VWT Sweden, Fabiano, Project Execution Director in VWT LATAM, Brasil and Benoit Gagné, CEO of VWT Canada. We had a discussion about the meaning of the IWD and what it means being a woman or a man at work. In this part, you’ll discover the actions that have been put in place within our company and the challenge to improve gender diversity Coming back to our BUs, what actions have been put in place in your BUs, in your area, with a view to achieve equality between men and women? Who wants to begin? I can start. I was talking last.This is Brandy and just to remind you,

as Isabelle said, I work for AnoxKaldnes which is located in Sweden and it is a subsidiary of Veolia Water Technologies. The BU where I work is roughly 50% women. The management team is made of six people, and five of those are women. I manage the Sales & Process team and there we are also 50% men and 50% women. You have to share your recipe! -Yes! -Fabiano? In another context? -Yes actually I think that here in Latin America we haven’t done so much in terms of fighting for this equality. But I think it's something that’s happening naturally because, as I’ve said, in Latin America, culturally speaking, I think that the difference is still very huge, but fortunately, within VWT Latin America Business Units it’s not happened. So if we take the example,

I think it is something around 32% of all the management or leadership positions available are held by women; which is quite good. And some of the main, I would say that the main top management positions, including the CEO position, are held by women, which is quite good. And it is good because it looks to me that the company is going in the right direction, despite the fact that the region is not so OK in that regard. But I think that we can improve a lot within the company. -Thank you Fabiano. Benoît? Yes, in Canada in fact, we have roughly 25% of women I would say. And I’ve looked at it and it is stable: since the last five or eight years we are ranging between 24%, 28%, 25%. I know that 15 years ago it was maybe

half of that. What is interesting is that in almost each department, when I was looking at it more closely i would say and in each department closely I would say, we have a woman, OK? Which is interesting and knowing that we have a workshop, OK? So we have a shop, and I would say a workshop, it’s a men's work, but we have women. Women welders, we have women working with us too. So how to increase? That is really to try to, you know, that’s a challenge that we have, to get the resumes, get the job because as i would tell you honestly uh with transparency, if we have equal competence between a man and a woman, we would have a tendency to hire a woman. Because we want to increase that percentage. and we think that they are bringing let’s say, something that is a bit different than a man.

I mean personality wise. Rana? Do you think it is the same between your area and region? I have the figures of lebanon so i will talk Lebanon, so I will talk about these percentages because I am based in Lebanon. Women represent 21% of the workforce and nine percent of the managers and i can say that lebanon has the highest number compared to the others in the region. So i think we need to make some efforts to increase the percentage of the of the woman in the workforce. -okay thank you so much

we we can see that the reality is quite diverse, in function of the area and of the geographical area but also the content area. And on the other hand, it is clear that there is increasing pressure to make our businesses as diverse as our society is, which makes sense for me. And yet the percentage of a women in managerial position is is still to be improved. At the Veolia level, there is a clear and a strong desire to appoint women to management positions. And

as Benoit mentioned, at the same level of skills and competencies, the choice, in this period would be to to hire a woman in order to balance our figures. And for the Veolia we have the target to to have 25 percent of managerial position filled by women. I have some figures about the water utilities to share with you: in water utilities the benchmark is a 18.7% of women in the employees and in a managerial position this figure is 21.5 percent. Today at VWT, women represent 22.8%

of our workforce and 24.6 percent of managers. We still have to work to explain this, don't you think Fabiano? -Well, Isabelle as i said already in my region in Latin America, particularly in Veolia you are a bit ahead, a bit above the average figures that you’ve just mentioned. But we still have a long way ahead of us in order to improve those figures. So, and I think that talking of what Benoît has just said, so regarding the skills and the competencies, I think that one of the things that we have to do also to improve that is to make sure that the performance indicators and the trainings and everything are applied in the same level for both men and women. Just because I think that by doing that, we will not give room to subjectivity in terms of performances. I think

this is quite important and I don’t know exactly how it works in the other BUs but here in brazil so we don't have any differentiation when it comes to performance indicators or opportunities and training which is key, in my opinion, for ensuring that people regardless to gender or any another sort of diversity, they will be assessed on a different way. That's an important thing so and the other thing i think is that i think it's also part of the local culture so i think we still haven't got, we still haven't seen, too many women interested in scientific studies, engineering careers and so on I think it's something cultural that we we have to address in the Latin America region. For example, you know, it's so it's like people still keep saying, here in Brazil for example: Ah this is something, this is a women's thing or this is a man's thing so and there is no men and women thing. there are things and that should be applied and should be be done by both men and women or regardless any diversity we are talking about. Well that's it i think that as i said, summarizing in terms of VWT Latin America; we are a bit above the average compared to the region, culturally speaking, which is good but there is still a lot to do, a lot to do. okay thank you thank you Fabiano. Brandy, do you think that we have to

push more for women in management positions? do we have to get some quotas? what is your opinion about that yeah i mean i think that both both Fabiano and Benoit made really good points that diversity does us a lot of good as a whole organization, righ,t we're a multinational organization. It means we're all over the world, and of course we have challenges with gender in certain parts of we where we work. But there's a lot of value with diversity identity. I didn't even mention before when i was giving the statistics about Anoxkaldnes, we're also very diverse culturally. Just in my team we have people from five different countries, in my small team of eight people.

So diversity really brings a lot of value, not only just on gender.But I think we also need to remember that, i mean we talk a lot about getting women into this the technical pool, or the pool as Benoit mentioned, getting women into these technical fields but when we talk about getting women into management positions of Veolia, the immediate need is not so necessay on the technical side but about developing them from a business management standpoint, making sure that our younger women in roles are also getting the necessary development they need in terms of business management and growth potential with doing that kind of work as well. And then i just think that my last comment on this is that, you know, as a big multinational organization of course we need to have kpis, we need to set goals for ourselves but we also shouldn't be too quick to just set some goals and then reach them and tap ourselves on the back and oh look we've done such a good job: we need to continue to challenge ourselves to to do even better. -Thank you so much Brandy Don't you think that to be able to get more women in managerial position means also to have some levels, some some pipelines and that for women to be recognized at this management position, they should have an experience and a success in their experience? That that means that we have to work on the pipeline where we can help our young woman to go on and to improve and to grow with the company.

So what kind of action could we identify at the level of VWT or at the level of your BU (Business Unit) to improve this gender diversity? Once again, not only in terms of numbers but in terms of management position. Maybe there’re probably 2 areas. The first one is probably to promote more the women we have in our BU.

I don’t think we do that. Because when we do ECHOS and we talk about High Potentials and so on i think we need, it will be good to highlightwomen, is there a woman in your organization that maybe it's starting or is a new engineer whatever and even though someone has 1 year of experience or 10 years, i think we need to highlight that, I think it's something we could do more internally. I would say externally to fill the pipeline i was looking at it and i saw that more and more universities give scholarship focused on women okay scholarship and i'm going back to my old university polytechnic school and i saw on the website and i looke they they were doing something interesting they said 40 women 40 weeks and that university what they offer a series of portraits honoring their professors and teachers who have careers in engineering. Why not doing the same? We have a lot of women, we have women in the organization why not select one of them and and be inspired by them to honor them by doing a portrait or whatever that's something that we can do, we can give scholarship to university too, to highlight that we are hiring because recruitment is still a challenge even though it's a man or a woman in our area you see? -yeah yeah thank you. I know that it has been done in some part of the world, we will come back also on the way to convince young people, young student to to go to scientist studies and how we can help for that but i think that yes this is definitely a good idea. I think also what you share here also is a way of what has been done already today so perhaps this kind of mentoring or something like that. Rana, would 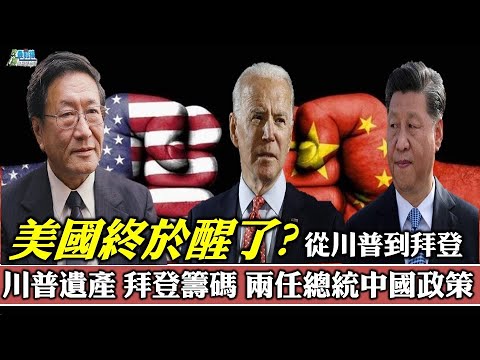 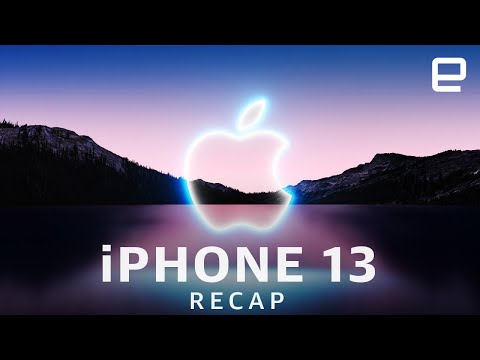 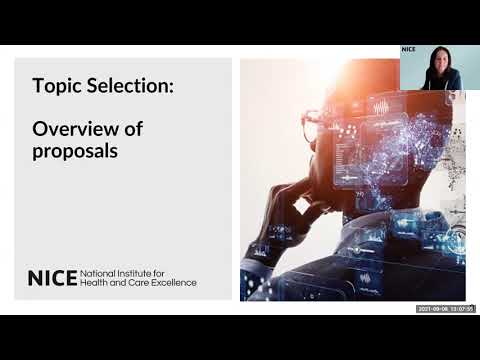